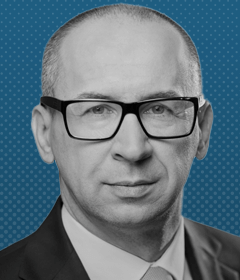 Chairman of the board of the Metropolis GZM, the first institutionalized metropolis in Poland. Coordinates work related to the implementation by the Metropolis of its statutory tasks: shaping the spatial order, social and economic development, development and integration of public collective transport and promotion. Previously, he was the deputy marshal of the Silesian Voivodeship, where he was responsible for matters related to, inter alia, with the European Social Fund, Environmental Protection and Economy, Tourism and Sport. In the years 1999 – 2003 he ran a business, then in 2003 he founded one of the first employment agencies in Poland, the company WORKER Sp. z o.o., which soon became one of the largest companies in its industry. In 2005, he became a founding member and Vice-President of the Association of Employment Agencies (SAZ), currently the largest Polish industry organization of employers associating employment agencies specializing in providing selected HR services. In 2007, he sold his shares in the company. Until 2010, he was a member of the management board, general director, introducing the investor to the Polish market. Kazimierz Karolczak is a graduate of the Faculty of Technology at the University of Silesia. He also completed post-graduate managerial studies at the Warsaw School of Economics.