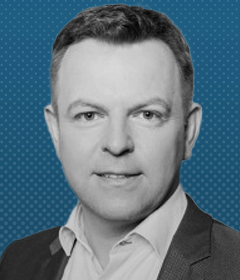 He has been associated with HAURATON Polska since February 2004. Since October 2013, he has been the President of the Management Board of HAURATON Polska sp. O.o. A graduate of Ecole Nationale d’Ingenieurs de Metz (ENIM) in France and the Poznań University of Technology, where he successfully completed his doctoral studies in the field of designing technological processes. In 2003 he obtained an MBA from The Nottingham Trent University program. He has been gaining experience in the construction industry since 1999 as Commercial Director of Arcelor Construction, currently ArcelorMittal. Then, for over 10 years, he held the position of General Director and Member of the Management Board of HAURATON Polska sp.z o.o.

Privately, a tennis fan who trains and participates in league games and inter-club tournaments for over 20 years. He tracks the achievements of professional players on an ongoing basis. He cheers live when he has the opportunity, and his favorite tournament is the ATP Master 1000 in Monte Carlo. Especially when the valued Rafael Nadal appears on the court.