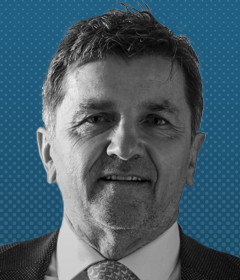 Professional, financial and social implementation – because this is how he treats the protection of the natural environment – gives him a great sense of happiness and satisfaction. It is he who, thanks to his determination and commitment, created a company that supports and develops new enterprises. A graduate of the Gdańsk University of Technology, Faculty of Hydrotechnics (born in 1986). After graduating, he founded P.U.H Ekol operating in the field of environmental engineering, consistently developing it, led to a merger with the Danish company Unicon and founded the Ecol-Unicon company, of which he also became the President. Leading it for over 20 years, he developed a company with branches all over Poland, exporting to many countries in Europe and the world, and employing over 300 people. His faith in people and their ambitions led him to invest in new companies whose financing by Ecol-Group allowed him to spread his wings and appear on the markets.

Privately, a great lover of nature and related sports – mountain climbing, sailing and diving. Involved in Solidarity and charity, for many years he believes that activity and activities for the benefit of society come back to us, creating a better country and a better future.